Posted on August 16, 2015 by sadielynwelhoff

It’s been five years since my first trip to Japan.  The last time I came I was 16 and I lived with a Japanese family for a month.  That trip was more life solidifying than life changing.  I had always wanted to travel, and going to Japan proved to me the dream was possible.  I wasn’t worried about being on my own in a foreign country, I was worried that my expectations of travel would prove to be too high.

But fortunately, I was on cloud nine the entire time I was in Japan, except for the one time I got stuck in the rain without an umbrella and missed my train.

This trip was only for 11 days, but there are plenty of differences from Korea that I noticed.  These are two completely different countries with unique cultures, but on the surface they look similar: largely racially homogenous, low crime rate, high test scores, lots of rice, and both countries made huge economic leaps after devastating wars.

A major difference was how people get on and off of the subway.  Japanese train passengers clear a path and let people off and file onto the train in an orderly manner.  In Korea it’s every man for himself and people start pushing as soon as the doors open.  Come on Korea, have a little patience so there’s less shoving.

Japanese women seemed liked they dressed more on the cute side with bows, frills, and lace.  Fashion is an individual choice, but there are trends.  Korean women tend to dress in a slightly more preppy way, at least that’s how I would describe the fashion.

Politeness is associated probably more with Japan than anywhere else, along with with quirky game shows.  People say “sumimasen” constantly.  It is similar to “excuse me”.  I bought two things at a souvenir shop and the cashier lady thanked me four different times while I was checking out.  Not every person in Japan is polite, but there seems to be a lot of emphasis on trying to be extra polite in the language to make sure no one is offended.

Japan also has a really nice smell.  I don’t know how to describe it, but you are met with a unique smell as soon as you step outside of a train station in Tokyo. 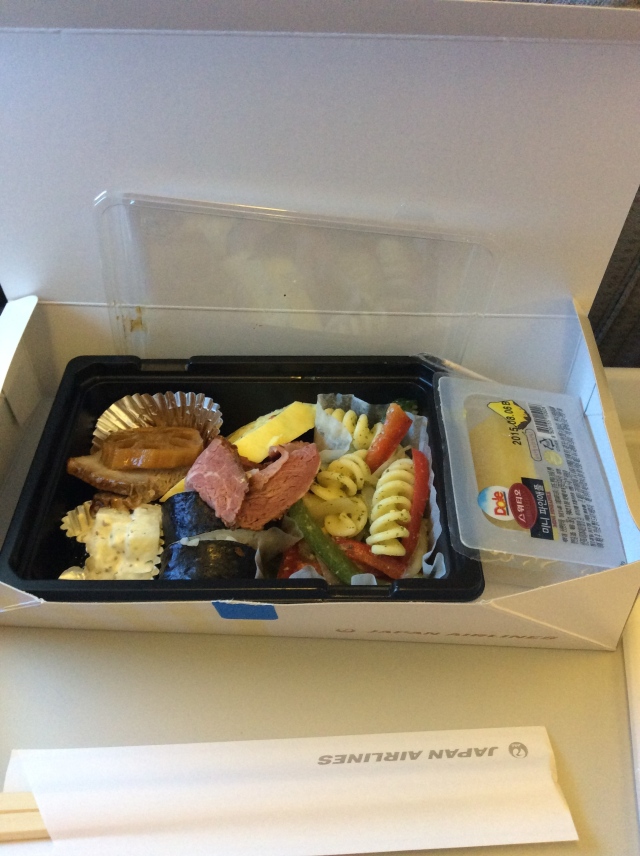 go Japan Airlines, the food was actually good, and we got all that food on a short 2 hour flight

little room at the Oak hostel in Tokyo

on the bullet train

…on the way to Onomichi

This entry was posted in Japan travel. Bookmark the permalink.