A short holiday in Guangxi

China is an enormous country with countless, beautiful sights to visit, but I’ve wanted to see the karst mountains in Guangxi for many years. It was cloudy and rainy for the majority of the time I was there but I think that just added to the mystical feel of the area.

I flew into Nanning and took a train to Guilin the next day. I didn’t see much in Nanning as I was just there to stay in a hotel for one evening. I did eat at McDonalds though which I’m sure doesn’t count as the most authentic Nanning experience.

The city of Guilin itself is beautiful with its surrounding mountains, rivers, lakes, and temples. While Guilin is home to over 4 million people and a popular tourist sight, I felt pretty relaxed while walking and taking in all the scenery.

I took a tour boat down the Li River from Guilin to Yangshuo county. We floated down the river for a few hours, walked around Yangshuo, and took a bus back to Guilin. There were several different tour boats and I can’t imagine how many tourists would be in Yangshuo if the weather was better.

floating down the Li River 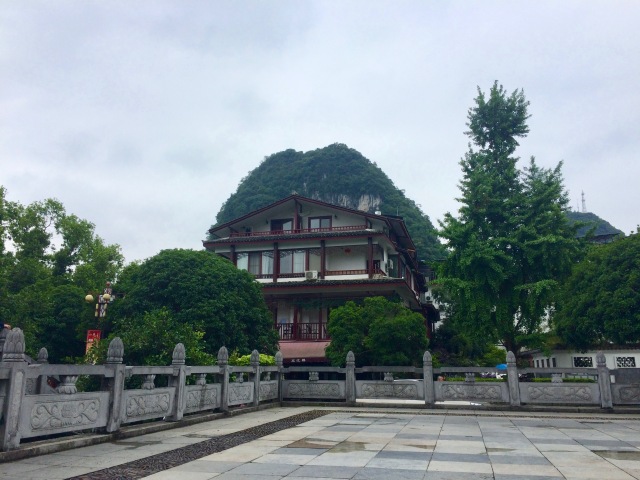 Yangshuo is a lot smaller than Guilin but there are some familiar chain restaurants, cute cafes, souvenir shops, clothing stores, and everything else you could need to be entertained for the day. Since the town caters to tourists, I might not recommend it to someone who hates crowds and tour buses. However, I am easily impressed by mountains and I’m generally not bothered by how “popular” a place is.

and why wouldn’t you want this view?

I did meet several incredibly kind people on this trip. That’s a common occurrence when I travel but it seemed like I got extra lucky this vacation. The tour guide on the Li River spoke Mandarin and English but I was the only person in the group that didn’t speak Mandarin. She would come over after every speech she gave and said it all again in English. I felt bad!

I also could not find my hotel in Nanning. I got to the right street but could not see the right sign. After wandering around looking like a lost and sad tourist, a security guard at an apartment complex and a woman who lived in the building tried to help me. She called her son who was living in America and had him talk to me in English to ask what I was looking for. Once we knew what I was looking for, they led me to the hotel.

Some older passengers on the train shared their snacks with me. The man sitting next to me on the train translated the conversations our fellow passengers were having and said if I was ever in his hometown of Xian, I could message him and he would point me to the best sights of the city.

This comment sounds unbelievably corny but I think it applies: the people were the most memorable part of the trip.

This entry was posted in China Travel. Bookmark the permalink.

1 Response to A short holiday in Guangxi