Posted on December 22, 2015 by sadielynwelhoff

“Ready to go to North Korea?”

Those are words I certainly never thought I would hear.

Many visitors coming to South Korea have the DMZ (which stands for Demilitarized Zone) on their bucket lists.  North Korea remains such a mysterious country and few get the chance to visit.  For most people, a DMZ tour is the closest you can get to North Korea.  There are tours that go into North Korea, but as adventurous as I am, I don’t know if I would be comfortable with that trip.

We drove north from Seoul for an hour to get close to the border.  A nice Korean lady was our tour guide.  She explained some brief history of the two Koreas while we were on the bus.  It was strange to suddenly be on a road with no other cars after battling through the traffic in Seoul.  We couldn’t even take pictures at some places in the road.

Our first stop was a tunnel that was dug by North Koreans trying to get into South Korea.  The tour guide told us that they used dynamite to dig their way to the south.  South Korean officials didn’t discover the tunnels until years later.  We weren’t allowed to take pictures in the tunnel, even though I saw people doing it.  What can I say, I’m not a rule breaker. 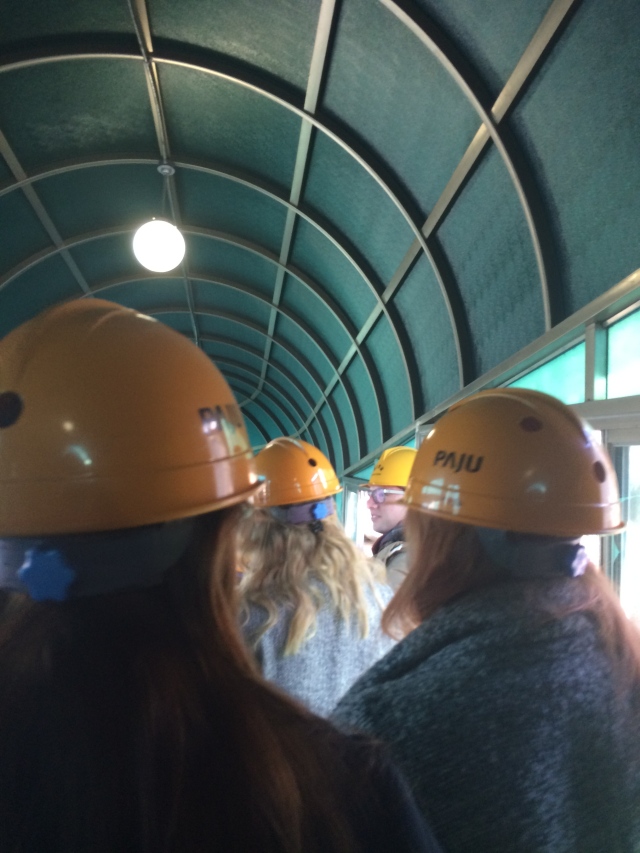 Gotta have your hard hats

The area around the tunnel looked like a nice rest-stop with lots of other tour buses. 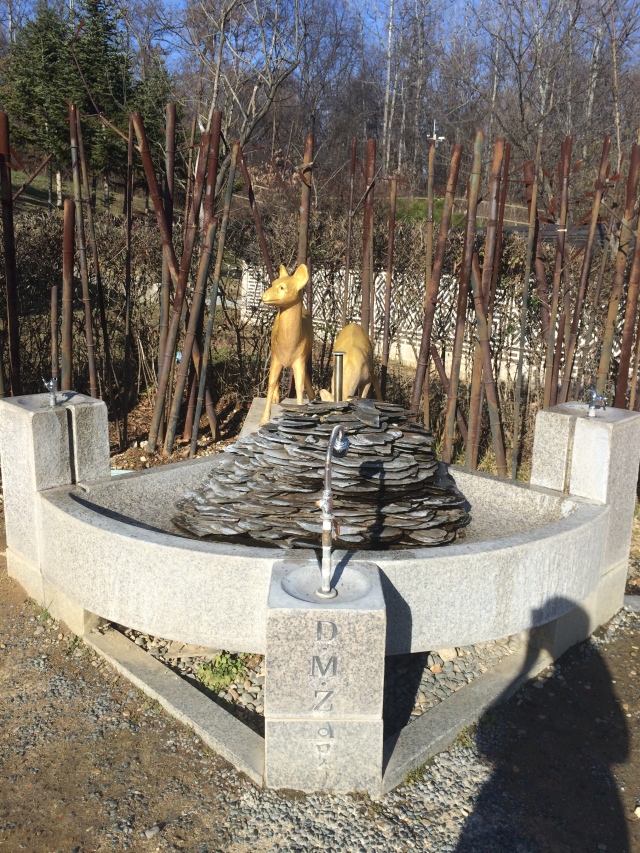 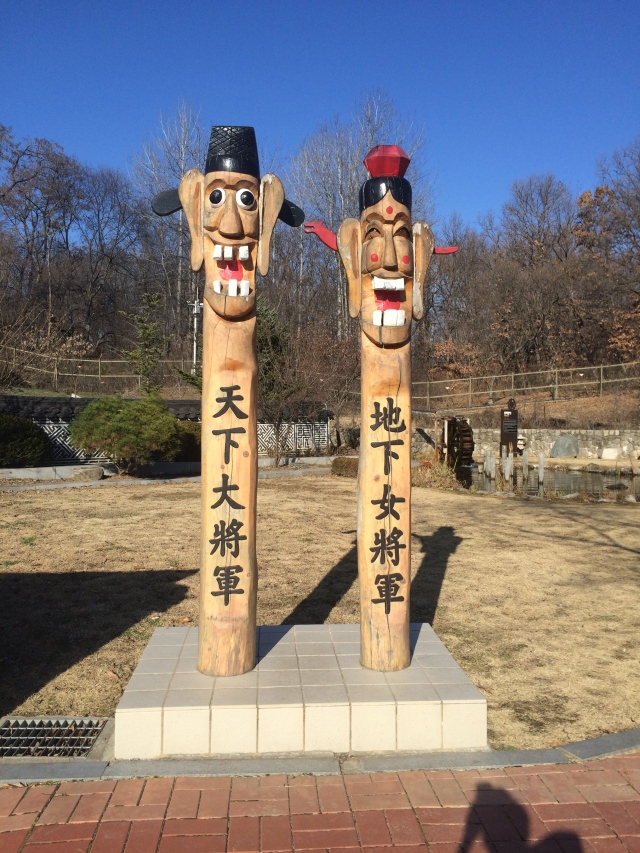 We also went to an observatory at the top of a terrifying hill to get a closer look at North Korea.  We were lucky because it was such a clear and sunny day, but the wind was freezing cold!

There was a souvenir shop right next to the observatory where you could buy DMZ t-shirts, coffee mugs, and even pieces of barbed wire from the DMZ fence.

Next we went to Dorasan station, a train station with service to Pyeongyang. 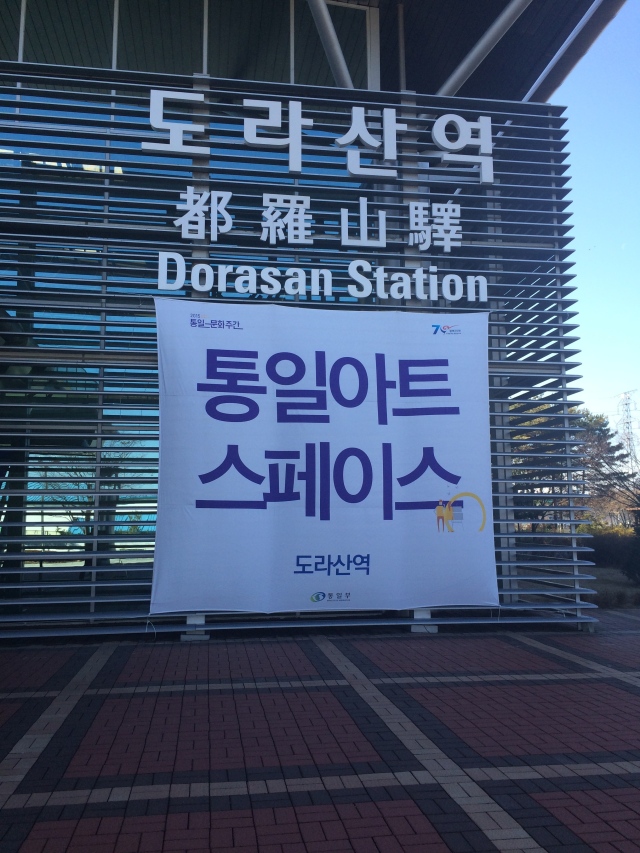 it says “to Pyeongyang”, no thanks, I’ll stay in the south

You can also take a DMZ train.  It is operated by Korail, the Korean rail company.  It goes from Seoul station to Dorasan station.  You can’t just get on it like a regular train, you have sign up for a ticket and present identification.  It takes you through all the landscapes in and around the DMZ. 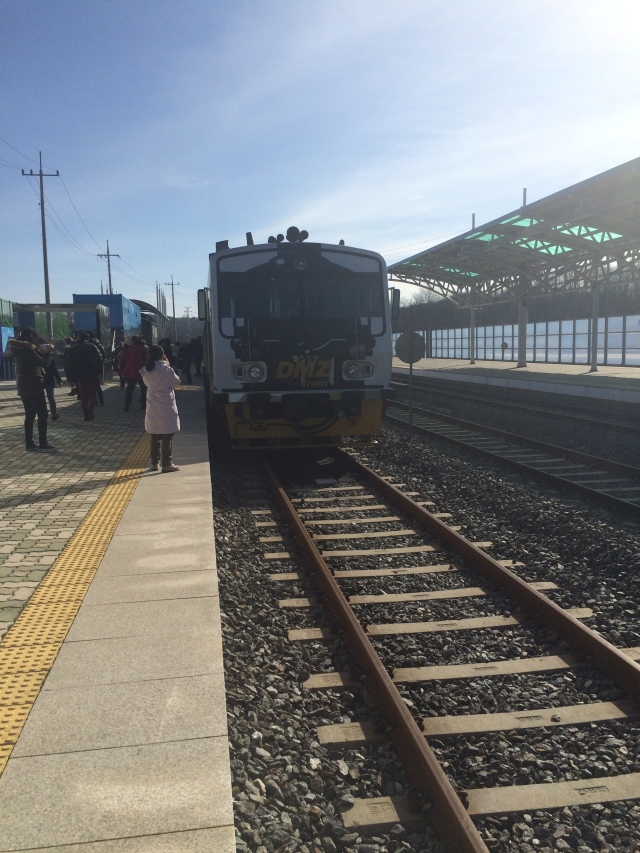 We stopped for lunch at a cafeteria.  I didn’t think it was worth the 10,000 won ($10) because my school lunch costs a lot less than that.  There aren’t any other restaurants around though so they probably know they can charge whatever they want.  There was another souvenir shop next to the restaurant with special whiskey that had been smuggled from North Korea. 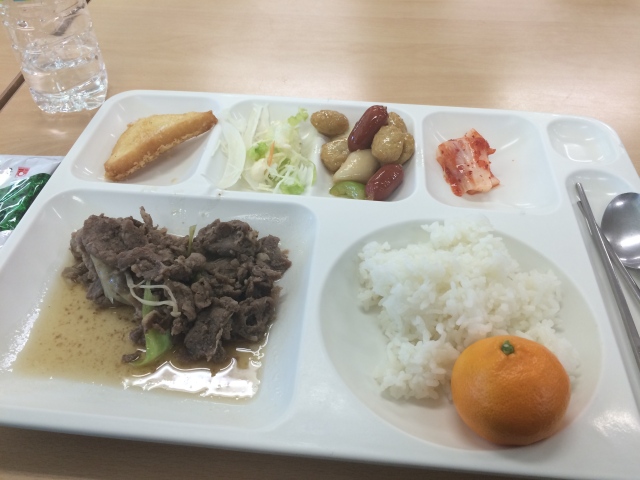 Our last stop was the JSA, which stands for Joint Security Area.  North Korea controls the north half of the JSA and the U.S. and South Korean forces control the south half.  Two U.S. soldiers joined us to tour the JSA and give us some information on the area.  One of the soldiers asked if anyone was planning on defecting to North Korea while on the tour.  Fortunately no one said yes. 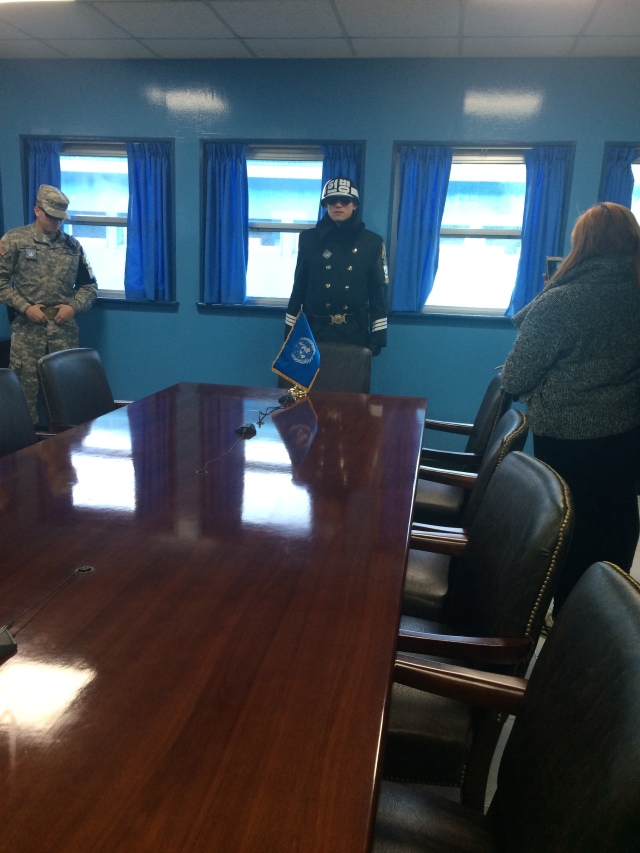 While we were there, we saw one North Korean soldier.  We got to go inside one of the little blue buildings right in the middle of the JSA.  You’ve probably seen them in a history textbook or on the news.  Sometimes representatives from both sides meet there for talks.

I felt bad for the one South Korean soldier that had to stand inside and get his picture taken by all the tourists.  Of course, on every tour there is one obnoxious person.  One lady kept trying to talk to him while she was taking pictures.  Lady, he’s not going to break protocol for you, leave him alone.

that’s a North Korean flag in the distance

People try and some succeed in crossing into South Korea from North Korea.  The most perilous attempt was probably in 1984 when a man from the Soviet Union, who was on a tour of North Korea, bolted across a section of the JSA to South Korea.  North Korean soldiers ran after him, firing their weapons, but he managed to escape.  He must have really wanted to defect because he chose the riskiest way possible.

We also drove to a hill to get a closer look at the North Korean side.  We stood right next to a “weather tower” which we weren’t allowed to photograph….hmmm….weather tower….right.  North Korea built a propaganda village where giant speakers blare propaganda about the wonderful leaders of North Korea whenever they feel like doing it.  Apparently no one actually lives in the village, but they paint the buildings to look like lights are on inside.

South Korea has a village close by.  According to the American soldier, the farmers that live there make a comfortable salary due to hefty subsidies and their children’s education is funded.  The catch is the village is guarded by soldiers and they have a strict curfew every night.  I don’t know if the money would be worth the risk of living so close to North Korea, but when you think about it, Seoul isn’t all that far away from the DMZ either.

Once the tour finished, we headed back to Seoul.  The tour guide pointed out the National Assembly Building on our way back.  We had to be at the USO before 8:30 am and we left Seoul at 9 am.  The tour finished a little after 3 pm and we got back to the USO at about 4:30 pm.

This was certainly one of the most fascinating trips I have taken while living here.  I don’t have a concrete opinion yet on the possibility of reunification of the two countries or on the American military presence.  Both of these topics are highly controversial.

I almost don’t want to say I enjoyed the tour because it was another reminder that the average North Korean person doesn’t get to casually tour the DMZ and shed the political strife when they get home.  Everyone touring on the South Korean side can go back to their normal, comfortable lives when the tour ends.  North Koreans lead incredibly difficult lives because of a conflict that was never solved.  South Korea is far from perfect in terms of government transparency and democracy but I don’t worry about famine or being sent to a labor camp.

There are many organizations trying to send aid to North Korean people, but it is nearly impossible to know if the aid is getting to the people that really need it.  I am grateful I was able to learn more about the history of the country I currently call home, but I can’t say I left the tour feeling hopeful.