Is Busan fun in February?

Posted on February 26, 2017 by sadielynwelhoff

Through a series of computer and phone problems, I managed to delete all of my pictures I took after the beginning of January.  Every single picture I took on my winter vacation vanished.

To say I was disappointed is an understatement.

I normally don’t buy a lot of souvenirs when I travel, so the pictures I take are my only mementos.  I’m no photographer, but it’s nice to actually show people where you’ve been as well as telling them about the trip.  Luckily I always send pictures to my mom while I am traveling and she hadn’t deleted the pictures I sent her.

So please bare with me while I sort through the few vacation pictures I managed to retrieve and enjoy the photos from my spontaneous trip to Busan.

South Korea is not a physically large country but the winter in Busan is still more mild than in Cheonan.  Most people crowd Busan during the summer time when they want to head to a great beach, but I still enjoyed walking by the ocean even though it was chilly.

I only went to Busan for one weekend but you can get there from Cheonan by KTX in just two hours.  I’ve heard of brave souls who take the bus, but that can take five or more hours.

I didn’t plan anything in advance, I just wanted to be able to walk outside without turning into a popsicle.  I don’t mind winter but I can only tolerate cold for a short time, so I feel like I’ve been hiding out indoors too much lately.

I walked along the ocean, ate street food, went to Haeundae beach, found some tasty seafood, and hiked up a hill in the middle of the city.  I really wanted to get a view of the entire city by going up to the top of Busan tower but it was undergoing repairs. 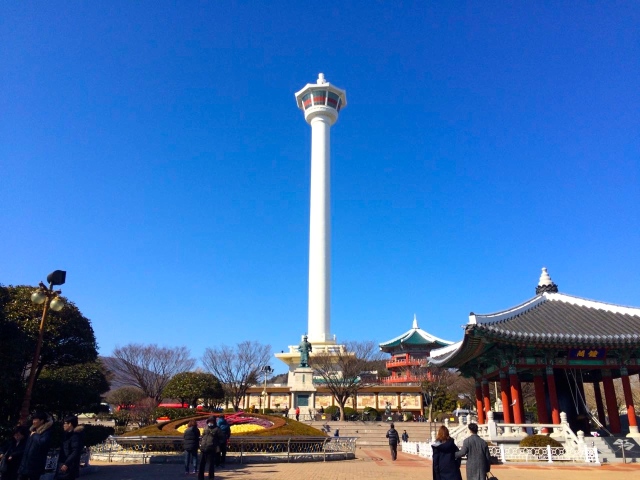 Haeundae beach during the winter-everyone is wearing coats

Is Busan still fun, even in February?  Yes, yes it is.