There’s corn hiding in there

There was no corn that I could see on the picture, but I should have known better.  Oh well, I had a pizza hankering and it did the trick.  I actually preferred it cold when I was eating leftovers.

Pizza Alvolo makes the dough out of rice flour which made the inside of the crust purple.  They also apparently like to get creative with their packaging.

I might try to order a different kind of pizza next time, maybe I will get lucky and it won’t have corn.

Those were just the times they’ve come up to me on the streets, they have also knocked on my door twice.

I was sitting at a bus stop outside my country school, which is in the middle of nowhere and two older ladies were walking by.  I said hello in Korean, thinking they were just walking to their house or down the road but they came over to me.

“Where are you from?”

“Do you know Jehovah?”

And then they gave me a flyer with the Jehovah’s Witness website on it and tried to tell me something in Korean but I didn’t understand.

They continued on to visit the unsuspecting residents of rural Cheonan.  I must be sending out a signal that I need Jehovah’s witnesses to come and convert me.

In my second grade class, I had my students divide up in a group and write a story using the key vocabulary and expressions.  Each student had to write one sentence and it could be about anything they wanted.

They were fantastic.  There were stories about bears, E.T., cheating boyfriends, picnics, and my personal favorite was about a time machine. 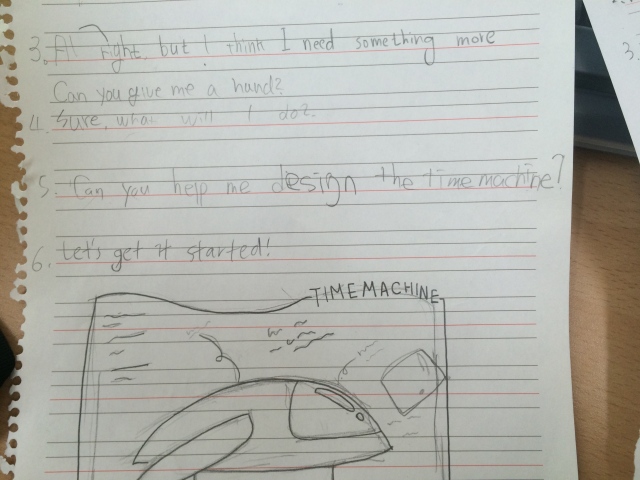 I didn’t tell them to draw, they just knew the story would be incomplete without a drawing of the time machine.

This week we are doing review of all the lessons we have covered so far and we are watching Spongebob.  They have mid-terms coming up and many of my students are in school from 8:30 to 4:15 pm and then after-school programs from 6:00 to 9:00 pm.  And they get to do homework for both institutions.

I think they deserve a little Spongebob.

This entry was posted in Korean schools, Slice of Life. Bookmark the permalink.