Korea has no shortage of tasty food

Posted on February 22, 2015 by sadielynwelhoff

I have a feeling I’m going to be one lame food blogger.

As soon as the food gets placed in front of me I think “I should take a picture of that, someone might think it’s interesting”.  And then I’m 3/4 into the food and I realize it’s too late for a picture.

Kimbap Nara and Kimbap Chungook are everywhere.  The closest analogy I can think of is they remind me of American diners.  Pretty standard fast food at each restaurant and really cheap.  It’s classic and simple Korean food.  But so far all the ones I have visited have been clean and you get good portion sizes for the price.

And most importantly, they serve all kinds of Kimbap.

Kimbap is rice wrapped in seaweed with a variety of fillings.  The most popular one has egg, radish, spinach, carrot, and ham.  Then it gets a spread of sesame oil and sesame seeds.

You can get kimbap with tuna, donkasu (pork cutlet), cheese, kimchi, and whatever else the kimbap lady comes up with. 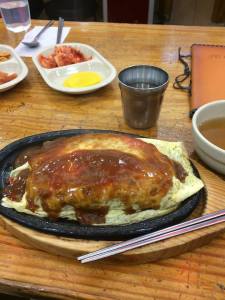 I haven’t gotten sick of rice…yet.  Maybe I can handle rice once a day, I don’t know about every meal. 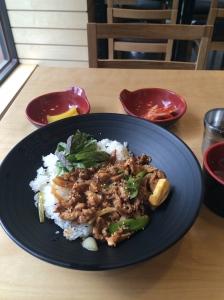 I also tried Indian food for the first time.  I have nothing to compare it to if I wanted to judge its authenticity, but I liked it.  And the piece of bread was enormous!  It was more like naan bread with a side of chicken tikka masala.

I’ll try to get more food pictures, but good food is awfully distracting.

This entry was posted in Slice of Life. Bookmark the permalink.

1 Response to Korea has no shortage of tasty food