Posted on February 7, 2015 by sadielynwelhoff

After waiting on all the paperwork from my college, government, and employer, I finally made it to South Korea on January 23.  Needless to say, I’ve been a little busy trying to figure out the neighborhood I’m living in and I’m just now starting to blog.  Dealing with jet lag, orientation, and a language barrier apparently gets in the way of creative juices. 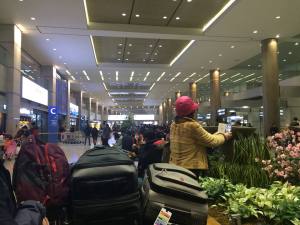 Incheon airport was sleek and shiny as I expected.  Although I only saw one small corner of it, everything was clean and easy to navigate.  Apparently people have nice things to say about the airport and I would agree. 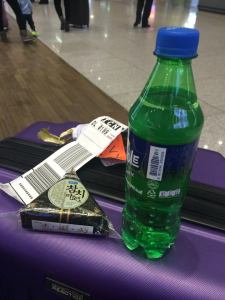 My first meal in the country was 5-star, or as 5-star as it could be for someone who hadn’t slept and didn’t want to drag her luggage into a crowded Incheon airport restaurant.  I don’t think the 7/11 patrons appreciated me taking a long time to decide on food while my giant purple suitcase was in their way.  I settled on sprite and a triangle kimbap.  Kim means seaweed and bap means rice.  Roll up some rice and tuna in a piece of seaweed and you have an 800 won meal of champions.

We were driven in a van to Cheonan, a city of 600,000 about 50 miles south of Seoul. I told myself “you have to stay awake, Korea is outside the window, look at it!”  But it was dark, and I hadn’t slept at all during the eleven hour flight, so I missed the scenery from the airport to Cheonan.

I swear I am better at taking pictures, but I was in a moving car and I was exhausted, hence the poor quality.  It says Cheonan.

I thought I would sleep for sixteen hours or some ridiculous length but no, I was up at 8 am, thank you jet lag!

This is the view from my window.

I have not experienced anything jarring yet when it comes to cultural differences but I’ve only been here for two weeks.

Everything here seems smaller compared to American sizes.  The drinks are smaller, the napkins are tiny, and the streets are generally more narrow.  I need to pick up car parking skills from the Korean drivers, because I don’t see how they could maneuver a car anywhere on these roads.

There are more apartment blocks than houses, and they all appear to be the same color.  I have yet to see a street without a coffee shop, but they open at 11 am.  Wouldn’t it be more effective to drink coffee at 7 am?  I don’t drink coffee anyway, which might end up saving me, since it seems more expensive than American coffee.  I couldn’t tell you if the quality made up for the price.

Everybody has a smart phone.  No more of those old timey flip phones.  And they are typically samsung phones, who would have thought.

I am eating carbs all the time, hopefully all the walking I am doing will offset the copious amounts of rice, pasta, and bread.  Korean women eat the same stuff I do, but manage to keep thin legs.  It might be a challenge to find pants here.

I am liking the kimchi, but in small doses.  Maybe after a while I can eat kimchi soup with a side of kimchi like a true Korean.

This entry was posted in Ranting and Raving. Bookmark the permalink.